The Growth Illusion How Economic Growth has Enriched the Few, Impoverished the Many, and Endangered the Planet 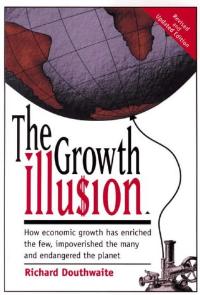 Is economic growth improving our lives? In 1992, when the first edition of The Growth Illusion appeared, most people had little doubt that the answer was ‘Yes’. Today, however, the climate of opinion has changed and there is widespread acceptance that, while growth might be necessary to generate jobs, the development path we are following isn’t making life better for ourselves or our children.

This new, revised edition of The Growth Illusion explains what has gone wrong. Douthwaite argues that since the 1950s, governments around the world have made economic growth their primary focus in the belief that by baking the biggest national cake, they are creating the resources needed to fulfill their political goals. Recent research in the USA, Britain, Germany and Australia shows that this ‘growth first, goals later’ strategy isn’t working and that in the past fifteen years the growth process has actually destroyed more resources than it has created on a sustainable basis. As these economies run backwards, their citizens become worse off.

So why is growth still paramount? Like an aircraft maintaining a minimum airspeed to stay aloft, so an economy must maintain a minimum growth rate if it is not to plunge into a deep depression. If demand fails to increase in any year, less investment will be made the following year, people will be thrown out of work and the economy will begin to unwind. The Growth Illusion explores this trap and many other topics along the way, asking fundamental questions about economics and the society in which we live.

In this revised and reworked edition, case studies and statistics have been brought up to date and amplified by new research. Douthwaite identifies recent changes in public attitudes to growth as the beginnings of an intellectual revolution as far-reaching in its consequences for human survival as those initiated by Copernicus or Darwin in their re-assessment of man’s place in creation. ‘Growth has pushed the economic system beyond safe environmental limits,’ he writes. ‘The present revolution involves our acceptance that Earth is finite and the laws of nature apply to us.’