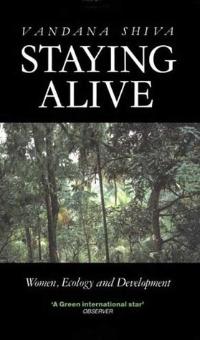 Vandana Shiva is one of the world’s most prominent radical scientists. In Staying Alive she defines the links between ecological crises, colonialism, and the oppression of women. It is a scholarly and polemical plea for the rediscovery of the ‘feminine principle’ in human interaction with the natural world, not as a gender-based quality, rather an organizing principle, a way of seeing the world.” —the Guardian

In this pioneering work, Vandana Shiva looks at the history of development and progress, stripping away the neutral language of science to reveal third-world development policy as the global twin of the industrial revolution.

As Shiva makes clear, the way this development paradigm is being implemented—through violence against nature and women—threatens survival itself. She focuses on how rural Indian women experience and perceive the causes and effects of ecological destruction, and how they conceive of and initiate processes to stop the destruction and begin regeneration. As the world continues to follow destructive paths of development, Shiva’s Staying Alive is a fiercely relevant book that positions women not solely as survivors of the crisis, but as the source of crucial insights and visions to guide our struggle.

Vandana Shiva is the author of many books, including Staying Alive, Earth Democracy, and Soil Not Oil. She is a leader in the International Forum on Globalization (IFG) and the Slow Food movement.