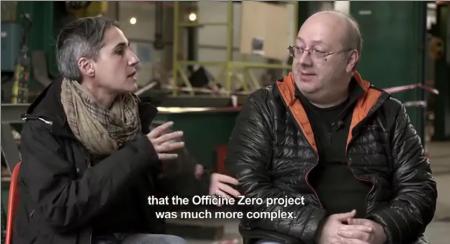 Officine Zero, former RSI (Rail Service Italia) was dedicated to the maintenance and repair of sleeping cars. When in December 2011 Italian train services decided to stop the night train service and invest in fast track trains, RSI closed. Some 20 workers out of the almost 60 employees strong work force did not accept the closing and took up the struggle. They found support among the activists from the nearby social center, “Strike.” In February 2012 they occupied their work place. Together they started a laboratory on reconversion, organizing public assemblies attended by hundreds of people. The “crazy idea” of the Officine Zero was born. Precarious workers, independent workers, craftsmen, professionals and students joined the occupation. The mixture between old and new work forms, bringing together different precarious work situations, trying to overcome isolation and individualization is an important core idea of the project.

On 2 June 2013, Officine Zero was officially founded as an eco-social factory. Officine Zero means literally “workshops zero”: “zero bosses, zero exploitation, zero pollution”, as their new slogan says. The name also points out that they had to find a new starting point. “That was the idea of putting together a workplace without bosses,” Miriam Freschi explains in the film, who joined OZ coming from the social center, “the idea of reuse and recycle wasn’t just a new way of working, but also a way to invent a new system.”

In half a dozen workshops as carpentry, padding, metal works and general repairs the workers at Officine Zero dedicate themselves mainly to recycling domestic appliances, computers and furniture. The common project is to turn the former sleeping car repair facility into an industrial reuse and recycle center. OZ is administrated horizontally by all workers, from the workshops together with the precarious workers sharing an office floor in the former administration building. Former RSI worker and head of the padding workshop Giuseppe “Peppe” Terrasi underlines the democratic decision making: “We do it with assemblies, assemblies we all take part in, and not in closed assemblies where some people know what is happening and others don’t”. Metal worker Guido Abballe, main responsible of metal works and welding shop makes clear that OZ is about more than just defending a work place: “The reason we are here, that we are growing and luckily, though with many difficulties, we are carrying on is that we are trying to find a new system, a new way”.

Directed and produced by Dario Azzellini and Oliver Ressler

The project was funded partly through support of the Austrian Science Fund (FWF) AR 183-G21.

Thanks for support to the Johannes Kepler University Linz, Austria