The Next System Project: New Political-Economic Possibilities for the Twenty-First Century 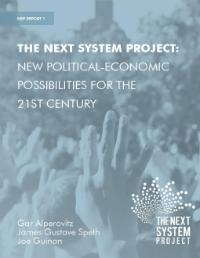 The Next System Project is an ambitious multiyear initiative aimed at thinking boldly about what is required to deal with the systemic challenges the United States faces now and in coming decades. Responding to real hunger for a new way forward, and building on innovative thinking and practical experience with new economic institutions and approaches being developed in communities across the country and around the world, the goal is to put the central idea of system change, and that there can be a “next system,” on the map. Working with a broad group of researchers, theorists, and activists, we seek to launch a national debate on the nature of “the next system” using the best research, understanding, and strategic thinking, on the one hand, and on-the-ground organizing and development experience, on the other, to refine and publicize comprehensive alternative political-economic system models that are different in fundamental ways from the failed systems of the past and capable of delivering superior social, economic, and ecological outcomes. By defining issues systemically, we believe we can begin to move the political conversation beyond current limits with the aim of catalyzing a substantive debate about the need for a radically different system and how we might go about its construction. Despite the scale of the difficulties, a cautious and paradoxical optimism is warranted. There are real alternatives. Arising from the unforgiving logic of dead ends, the steadily building array of promising new proposals and alternative institutions and experiments, together with an explosion of ideas and new activism, offer a powerful basis for hope.