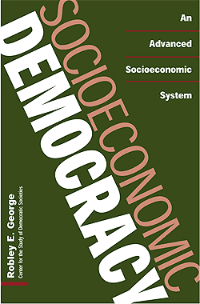 OCIOECONOMIC DEMOCRACY: An Advanced Socioeconomic System first defines and describes what is meant by the term Socioeconomic Democracy.

Socioeconomic Democracy is a model economic system, or more precisely, socioeconomic subsystem, in which there is some form of Universal Guaranteed Personal Income as well as some form of Maximum Allowable Personal Wealth, with both the lower bound on personal material poverty and the upper bound on personal material wealth set and adjusted democratically by all society.

The book then indivdually examines in some detail each of these two bounds, i.e., UGI and MAW. Next is democracy. Here we first consider a few preliminaries, including a discussion of the inevitability of democracy, a prehistory of majority rule and a brief discussion of contemporary qualitative democracy. We then consider the simple, mathematically correct procedure by which society, exercising quantitative democracy (employing the most elemental of public choice theory results), can democratically decide the amount or magnitude of these two bounds – and other amounts in question.