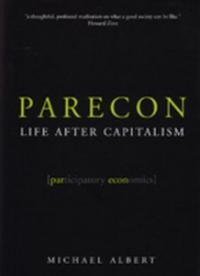 « What do you want? » is a constant query put to economic and globalization activists. In yet another volume, Albert expounds on his answer—participatory economics, « parecon » for short—a new economy, an alternative to capitalism, built on familiar values including solidarity, equity, diversity, and people democratically controlling their own lives, but utilizing original institutions fully described and defended in this book.

« Michael Albert’s work on participatory economics outlines in substantial detail a program of radical reconstruction, presenting a vision that draws from a rich tradition of thought and practice of the libertarian left and popular movements, but adding novel critical analysis and specific ideas and modes of implementation. It merits close attention, debate, and action. » —Noam Chomsky

« [A] thoughtful, profound meditation on what a good society can be like. » —Howard Zinn.