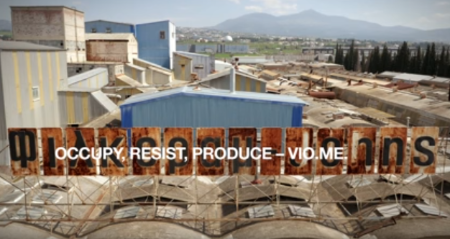 VIOME is a building materials factory in Thessaloniki, Greece, which was abandoned by its owners at the peak of the Greek crisis, in 2011. Subsequently it was occupied by its workers, and has been producing natural detergents under workers’ control since 2013. Despite being an emblematic and inspiring struggle, today VIOME is under imminent threat of eviction. Find out how you can get involved and be part of the struggle at viome.org.

This is the third in a series of short documentaries on the self-managed factories of Europe made by militant film-makers Dario Azzellini and Oliver Ressler. Find the other two here: