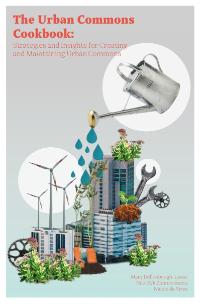 Urban commons can be a buffer for crises and provide vital community resources like urban gardening, housing, urban development, and bike sharing. What are the ingredients that make a cooperative community project most likely to succeed? And what are some challenges and lessons learned from the eight projects highlighted in The Urban Commons Cookbook?

Urban commons are resources in the city that are managed by the users in a nonprofit-oriented and prosocial way. They go by many names, from grassroots activism to community-led initiatives, but are united by two main characteristics. First, they are managed by the users through a collective, participatory process of accessing, managing, and developing the resource called commoning. Second, commons projects measure value based on how their use for community members, rather than measuring them by their ability to generate profit. The process of commoning creates added social benefit for the commoners, the city, and society as a whole, and increases social resilience.

The eight case studies in The Urban Commons Cookbook provide a wealth of information about the nuts and bolts of day-to-day life in a commons project. Each one tells its own local story but they are also united by eight shared challenges and strategies for succeeding in the world of the urban commons:

Cooperation with industry, private foundations, and larger or more established groups can help aid transition, scaling up, and risk mediation. Big partners can be especially important when there is a big initial investment. However, it is important to define the conditions of cooperations in a concrete way, for example through a written agreement, to avoid misunderstandings and the risk of enclosure — that is, takeover by the larger partner.

A written mission statement or manifesto can be a good tool for getting all the participants on the same page but it’s important to be flexible in day-to-day work, especially in small and medium-sized groups. The written statement may become outdated fairly quickly because the commoning process is so agile. Don’t get bogged down trying to update it unless there is a concrete need to do so. Small and medium-sized groups can usually get away with verbal agreements during other processes and at regular meetings. However, written agreements play a more central role in very large groups, where informal control mechanisms are weak because not everyone knows everyone else.

A clear adversary or problem can be a good motivator for immediate action and continued support but it’s important to consider how to survive beyond the initial “fight.” Concentrate on what your project is for, not just what it is against. Align your theory of change with the values and goals of the wider community in order to get others engaged and create support for your project beyond the member group.

Join forces with like-minded groups. Create or join umbrella organizations to increase the effect of collective action and take advantage of economies of scale and the internal differentiation of roles. Share resources and skills to empower each other and build synergies. Don’t reinvent the wheel if you don’t have to — maybe someone else already has a solution to the problem you’re facing.

Scaling up, moving, and transformation are the biggest challenges commons projects face. Growing pains can help test how good existing structures are and identify where improvement or adjustment are needed. For example, these challenges provide new opportunities to test how robust your discussion culture and cooperation network are. Resources like The Urban Commons Cookbook can offer assistance.

Use media to increase awareness and visibility as the first step towards advocacy and political lobbying. Use multiple channels (i.e. local newspapers and Facebook) and adjust your language based on your audience to reach a large variety of potential supporters. Several projects also used local political campaigns as springboards for their projects and causes. Always be on the lookout for opportunities.

Base the structures of commoning on the real situation and be willing to adapt as it changes. Make the organization about the people instead of forcing people to accept your organization. This includes how the group communicates, decides, how deliberations are moderated, and a range of other aspects. Make sure everyone is involved in making changes and that decisions are transparent and accountable.

Finally, make the process enjoyable and tap into people’s enthusiasm. Passion will help keep the project afloat even when it is faced with challenges. Even though this seems like a long list, try not to get bogged down by too many rules, and don’t forget to have fun!

This list is adapted from The Urban Commons Cookbook, a handbook for those interested in starting and growing community-led projects which highlights eight projects from Europe, South America, and the United Kingdom. It outlines the growth of their projects, the challenges they faced, and the methods they employed to surmount them. Want to know more? Get your own copy of The Urban Commons Cookbook here.