Where does money come from? A guide to the UK monetary and banking system. Second Edition. 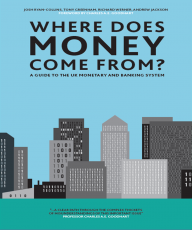 What is money? How is it created? How does it enter into circulation? These are simple and vital questions it might seem, but the answers remain contested and often muddled.

There is widespread misunderstanding of how new money is created. Where Does Money Come From? examines the workings of the UK monetary system and concludes that the most useful description is that new money is created by commercial banks when they extend or create credit, either through making loans or buying existing assets. In creating credit, banks simultaneously create deposits in our bank accounts, which, to all intents and purposes, is money.

Many people would be surprised to learn that even among bankers, economists, and policymakers, there is no common understanding of how new money is created. This is a problem for two main reasons. First, in the absence of this understanding, attempts at banking reform are more likely to fail. Second, the creation of new money and the allocation of purchasing power are a vital economic function and highly profitable. This is therefore a matter of significant public interest and not an obscure technocratic debate. Greater clarity and transparency about this could improve both the democratic legitimacy of the banking system and our economic prospects.

Defining money is surprisingly difficult. We cut through the tangled historical and theoretical debate to identify that anything widely accepted as payment, particularly by the government as payment of tax, is, to all intents and purpose, money. This includes bank credit because although an IOU from a friend is not acceptable at the tax office or in the local shop, an IOU from a bank most definitely is.

We identify that the UK’s national currency exists in three main forms, the second two of which exist in electronic form:

Central bank reserves – reserves held by commercial banks at the Bank of England.

Commercial bank money – bank deposits created either when commercial banks lend money, thereby crediting credit borrowers’ deposit accounts, make payments on behalf of customers using their overdraft facilities, or when they purchase assets from the private sector and make payments on their own account (such as salary or bonus payments).

Physical cash accounts for less than 3 per cent of the total stock of money in the economy. Commercial bank money – credit and coexistent deposits – makes up the remaining 97 per cent of the money supply.

There are several conflicting ways of describing what banks do. The simplest version is that banks take in money from savers, and lend this money out to borrowers. This is not at all how the process works. Banks do not need to wait for a customer to deposit money before they can make a new loan to someone else. In fact, it is exactly the opposite; the making of a loan creates a new deposit in the customer’s account.

More sophisticated versions bring in the concept of ‘fractional reserve banking’. This description recognises that banks can lend out many times more than the amount of cash and reserves they hold at the Bank of England. This is a more accurate picture, but is still incomplete and misleading. It implies a strong link between the amount of money that banks create and the amount that they hold at the central bank. It is also commonly assumed by this approach that the central bank has significant control over the amount of reserves banks hold with it.

We find that the most accurate description is that banks create new money whenever they extend credit, buy existing assets or make payments on their own account, which mostly involves expanding their assets, and that their ability to do this is only very weakly linked to the amount of reserves they hold at the central bank. At the time of the financial crisis, for example, banks held just £1.25 in reserves for every £100 issued as credit. Banks operate within an electronic clearing system that nets out multilateral payments at the end of each day, requiring them to hold only a tiny proportion of central bank money to meet their payment requirements.

The power of commercial banks to create new money has many important implications for economic prosperity and financial stability. We highlight four that are relevant to the reforms of the banking system under discussion at the time of writing:

Although useful in other ways, capital adequacy requirements have not and do not constrain money creation, and therefore do not necessarily serve to restrict the expansion of banks’ balance sheets in aggregate. In other words, they are mainly ineffective in preventing credit booms and their associated asset price bubbles.

Credit is rationed by banks, and the primary determinant of how much they lend is not interest rates, but confidence that the loan will be repaid and confidence in the liquidity and solvency of other banks and the system as a whole.

Banks decide where to allocate credit in the economy. The incentives that they face often lead them to favour lending against collateral, or assets, rather than lending for investment in production. As a result, new money is often more likely to be channelled into property and financial speculation than to small businesses and manufacturing, with profound economic consequences for society.

The basic analysis of Where Does Money Come From? is neither radical nor new. In fact, central banks around the world support the same description of where new money comes from. And yet many naturally resist the notion that private banks can really create money by simply making an entry in a ledger. Economist J. K. Galbraith suggested why this might be:

The process by which banks create money is so simple that the mind is repelled. When something so important is involved, a deeper mystery seems only decent.

This book aims to firmly establish a common understanding that commercial banks create new money. There is no deeper mystery, and we must not allow our mind to be repelled. Only then can we properly address the much more significant question: Of all the possible alternative ways in which we could create new money and allocate purchasing power, is this really the best?