The Big Shift. Rethinking Money, Tax, Welfare and Governance for the Next Economic System 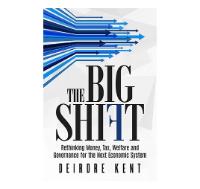 This important little book is a dense read full of big ideas. Our growth-dependent economic system is past its use-by date and must be completely replaced.

Basing her work on the policy discussions of the New Economics Party of 2011-2015, the author argues that neither monetary reform nor tax reform are possible at central government level. The banks are just too powerful these days. A change from an intrusive welfare system to a basic income must be financed by sharing the rents from land, natural resources and natural monopolies.

To design an economic system to serve the planet in a post fossil fuel age requires bold thinking on money design, land tenure and governance. With convincing examples from history and many references, the author describes the conditions for a stable and prosperous society, says we need to replicate them, then proposes a system.

Given the political challenges, she concludes that local government should assume powers of money creation, land purchase and rule-making about taxes for trades in that new currency.