Diet for a Hot Planet. The climate crisis at the end of your fork and what you can do about it. 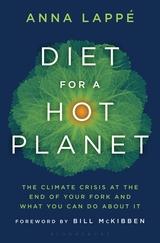 In 1971, Frances Moore Lappé’s Diet for a Small Planet sparked a revolution in how we think about hunger, alerting millions to the hidden environmental and social impacts of our food choices. Now, nearly four decades later, her daughter, Anna Lappé, picks up the conversation. In her new book, the younger Lappé exposes another hidden cost of our food system: the climate crisis.

While you may not think “global warming” when you sit down to dinner, our tangled web of global food—from Pop-Tarts packaged in Tennessee and eaten in Texas to pork chops raised in Poland, with feed from Brazil, then shipped to South Korea—is connected to as much as one third of total greenhouse-gas emissions. Livestock alone is associated with more emissions than all of the world’s transportation combined. Move over, Hummer. Say hello to the hamburger.

If we’re serious about the climate crisis, says Lappé, we have to talk about food.

In this groundbreaking book, Lappé exposes the interests resisting this conversation and the spin tactics companies are employing to deflect the heat. With seven principles for a climate-friendly diet and success stories from sustainable food advocates around the globe, she offers a vision of a food system that can be part of healing the planet. An engaging call to action, Diet for a Hot Planet delivers a hopeful message during troubling times.