Audio : How Residents of an English Town Took Governance and the Local Economy Into Their Own Hands 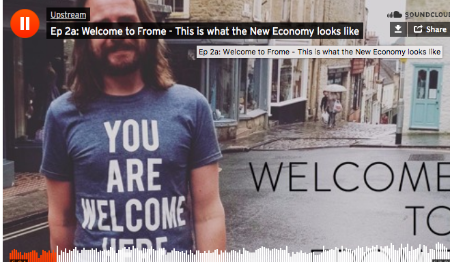 The stories in this series come from a small town in the United Kingdom called Frome, but the themes and topics explored are global in scale, ranging from the Americas to the Himalayas. Despite its unique setting, nestled in the sleepy countryside of southeast England, Frome is a microcosm of much of what is taking place in towns and cities around the world. The voices of Frome tell stories that will sound familiar all across the globe, and if you listen closely, you just might hear your own story in there as well.

Our story begins in a noisy bar. A few years ago, a group of disgruntled Frome residents were sitting around a table at their local pub, complaining about how bad their local town council was. Sound familiar? Well, this story is a bit different. Fast forward a few years, and the coalition that these residents decided to form has completely replaced every last council member. This coalition is known as the Independents of Frome, and their platform is based on a rejection of traditional party politics and on bringing power down to the local level.

This episode explores the Independents of Frome, as well as many of the initiatives that they have promoted and supported: a community fridge, a library of things, a town resilience officer, and more.

But the story of Frome, like most things in life, is not as simple as it may appear. This town has a long and at times dark history, and when parts of that history are uncovered, old wounds are revealed which tell an all too familiar story of division and gentrification. We’ll touch on this history here before we delve much deeper into these divides next week, in part two of this three-part series.

In this second episode of our 3-part series, « Welcome to Frome », we explore the darker history of the small Somerset town of Frome.

In this episode, you’ll meet more Frome residents, more politicians, local historians, experts in the field of inequality, and a filmmaker. We’ll tackle some timely topics and ask some difficult questions.

What are the scars left from thirty years of closing factories and cutting government services? How do these scars reveal themselves in our hearts and in our communities? Is it possible to bridge the economic, social, and psychological divides that carve up our societies? If it’s possible, then how do we do it?

In this final episode of our 3-part series, « Welcome to Frome », we explore possible futures for the small Somerset town of Frome.

In this episode, we’ll talk to some of the leading experts on why GDP and economic growth are flawed measures of wellbeing. Then we’ll travel to a small kingdom in south Asia, an indigenous village in the sierras of Peru, and the headquarters of Happy City in Bristol. We’ll talk to the visionaries of new cultural paradigms. and ask them to reveal the secrets of happiness and wellbeing that are hidden right beneath our noses.

How can Frome adopt a wellbeing strategy that helps to further the movements we discussed in episode 1 and which begins to bridge the divides we explored in episode 2? There’s no simple solution, but we hope that this series will provide some food for thought in towns and cities like Frome all over the world.