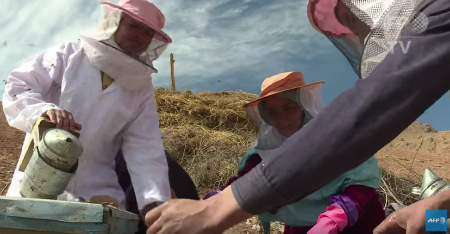 In the mountainous central province of Bamiyan, one of the country’s least developed but most liberal regions, beekeeping complements its only other commercial crop, potatoes, and gives rural women the chance to become entrepreneurs.

Cooperatives in Afghanistan were banned for a number of years and were allowed again only 15 years ago, according to the International Co-operative Alliance based in Brussels, Belgium.

« Since then more than 3,000 co-operatives were re-registered, » the ICA noted. « However, many one these are not familiar with co-operative values and principles and also need support for capacity building. »

The cooperative beekeeping industry is an example of how co-ops can transform the lives of people with limited access to resources — those who have historically been unable to create entrepreneurial ventures. As new worker co-ops continue to redefine the cooperative movement, through platform co-ops, cabby-owned taxi cooperatives, artist co-ops, freelancer collectives and more, co-ops are increasingly being used as a tool to empower underserved communities and create an equitable and sustainable economy that works for all. (Article of Shareable.