Stir Magazine: Spring 2020 : Alternatives for the crisis & Beyond 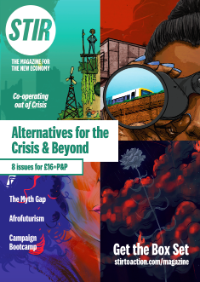 “Today’s radical policy tools are less crude than traditional tariff barriers and other forms of trade protection. But they too aim at providing a developmental path in which local economies are at least partly protected from the icy winds of global competition: a form of actual protection rather than mere protectionism.”

When there is a beautiful moment, you can either fixate on it and then it’s not political anymore. Or what you can try to do is to find the ways to extend it and I’d say that’s been the political project over the last ten years.

Inclusive Economies and the Role of Community Power — Neil McInroy

“Austerity and cost cutting pressures have eviscerated our public services. Any attempts to place their design and delivery in the hands of communities under these conditions will surely serve to deepen marketisation as they are forced to compete for scarce public resources. We should be wary of any slippery slope in which a struggling community sector delivers less with less, dressed up in the language of empowerment.”

“How do we start to see community-led housing as significant and meaningful? How can we present it in a way that changes the way that policy makers and others in the housing sector see the individual projects that exist or are emerging within the sector? One way is to understand that all types of community led housing initiatives are addressing the underlying issue of rent.”

Interview with Jodi Dean, author of Crowds and Party

“Crowds and Party was published five years after Occupy and I’m trying to argue for a way of seeing that disruption as a moment towards a resurgence of the party form. Though that’s not, strictly speaking, an empirical claim, it’s my agitational claim. I’m inviting people to look at it differently - that’s what makes it politics - where we can argue over the crowd event to try to make it open into some possibilities directed around a particular kind of politics.”