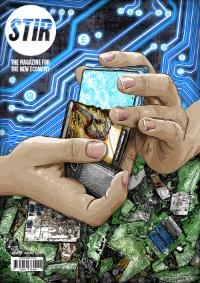 “Supporting communities to engage with justice helps them to appreciate the opportunity to rehabilitate and recover the assets of individuals who are at risk of being lost to that community. Prisoner co-operatives both build the incomes of prisoners and their families as well as the wealth of the communities to which they will return.”

“Local resilience is an incredible outcome on its own, but we should aim for networked commons rather than be satisfied just to provision our lifeboat better. We need to look to local commons – assemblies of people who form self-governing groups around their relationships to resources.”‍

Cultures of Co-operation: Insights from a Study of Co-ops in the Creative Industries - Marisol Sandoval and Greig de Peuter

“During moments of crisis, when the limits of dominant structures lie harshly exposed, the need for alternatives emerges with renewed urgency. Creating secure, caring, and democratic workplaces from within a competitive economy that privileges profit over people is not easy.”

“In an era defined by party-skepticism, David Graeber’s work has been relevant to those who’ve rejected working through the political system and are challenging the fundamental premises of our economy. He not only raised political horizons beyond markets and states but insisted on the ‘notorious popular ability’ to create entirely new political, economic, and social forms."‍‍

“This moment presents us with a number of opportunities to reset our democratic conversation, reconstruct our politics, rebuild our communities, and reprioritise and re-value the public sphere…The goal is simple but transformative: a deep and purposeful reorganisation of our economy so that it is democratic, sustainable, and equal by design.”

“'[With] the world is in flames and flood, and the call and refrain of ‘people power’ ringing out across the streets of the globe brings some hope in the dark…The bank became a hub of economic education with the ‘performance of making’ offering a tactile way into the concepts and preconceptions we aimed to tackle.”