A World Court for Corporations 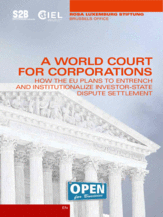 A world court for corporations would be the capstone in the architecture of corporate impunity, undermining democratic institutions and lawmaking, and worsening the power imbalance that grants rights, protections, and compensation to corporations at the expense of the public interest.