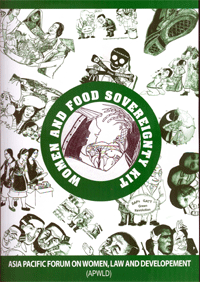 The compiling of the Women and Food Sovereignty Kit has been a challenging and difficult piece of work, in more than one way. The need to include the experiences of women activists and to ensure that women’s voices are included in the kit, necessitated that the manual was not developed in isolation. Hence, the Kit reflects the work and commitment of a number of institutions, and individuals. The input by a number of individuals in the conceptualization of the manual, and inclusion of essential material, has been the basis of the final piece of work. The enthusiasm and energy shown at the beginning has been the reason that the project has seen completion.

The Women and Food Sovereignty Kit in part reflects the learnings of women activists engaged directly with peasant women in the Asian region, and is partly a response to the need reflected by organizations and activists working with grassroot women in the rural area. The dearth of a single compilation which could be used by grassroot activist engaged in the mobilization of peasant women to understand Globalization and its direct attack on their ability to safeguard not only food but livelihood for themselves and their families, and responses developed by peasant communities against the encroachment of corporate agriculture in their lives was the major thrust that resulted in the development of the Kit.

It is hoped that the Kit will be used widely and would be of help to activists in the Asian region and beyond. It is well understood that the Kit as it is used will need many changes to incorporate the needs of our sisters, their experiences, insights and learning. It is hope that feedback and criticisms will be sent back to us at APWLD, and we would find ways and means to incorporate new learning to help further the advocacy for food sovereignty.

This Kit will be adapted and translated in at least five languages for more appropriate use in local communities – Urdu (Pakistan), Ilokano (Cordillera Province of the Philippines), Malayalam (Kerala, India), Thai and Bahasa (Indonesia). We offer this as APWLD’s contribution to the organising and mobilising of women at the grassroots level, as they struggle against globalization and collectively assert women’s rights to land and food.